I'm writing this post to help fellow music producers and engineers who may have the same problems I've had with wrist pain.  Keep in mind I'm not a doctor so please contact your own doctor before making any changes to your healthcare.

Something that a lot of people aren't aware of is that being a modern music producer/engineer involves a LOT of tedious editing on a computer.  One song can easily have hundreds of very small edits to make the performances sound perfect.  It's great that we have the technology to do this sort of editing but it does come with a toll to the person whose job it is to do it!

There are a lot of music producer/engineers, myself included that have extensive wrist problems as a result of the years of editing on computers.  I myself developed problems about 3-4 years into my professional career. It's kind of hard to describe what it feels like other than to say there’s a bit of pain and discomfort while working on a computer or playing some instruments.  I remember in 2004 it got so bad that I actually wasn't sure how I was going to be able to keep working.  Needless to say that was a pretty scary time.  I went to the doctor and after some tests all she could really tell me was that I didn't have tendonitis.  She described the problem as a "repetitive strain" injury.

Fortunately for me, my sister is an athletic therapist who runs a clinic in Burlington (shameless plug for her: http://www.elliottsportsmed.ca/) and she suggested I get a wrist brace to immobilize my wrist while I was working.  When I started wearing the brace I had immediate relief and could instantly start working again.  Here's a picture of the brace which is made by Corflex: 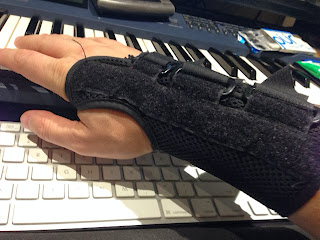 After I got the brace, things got a lot better and as time progressed I found I didn't have to wear it as often.  My wrists still felt a bit stiff and there was always a bit of discomfort but it was more manageable.

One day I was working with a friend of mine and she noticed the brace and mentioned I should try glucosamine which is a supplement made for joints. I picked some up at a local health food store and noticed an improvement with how my wrists felt after about a month.  Fast forward another couple of months and a chiropractor friend of mine (Dr. David Koivuranta  http://www.dkchiro.com/) mentioned some supplements made by Isotonix.  They make a "joint health" supplement with glucosamine and some other goodies that were supposed to be really effective.  It was a lot more expensive than normal glucosamine but I figured I'd give it a try. After a month everything was feeling night and day better.  I still wear the brace as a preventative measure but it's rare that I feel any discomfort now.

The main reason I'm sharing all this with you is that you should be aware of what all those tiny edits are doing to your body and try to prevent the damage from happening.  As music industry professionals we work long hours with few days off and eventually all that strain we're putting on our bodies catches up with us.  I'll probably always have issues because to a certain extent the damage is done, but if it hasn't gotten that bad for you or you're just starting out, do yourself a favor and buy a wrist brace to prevent any future damage.

If you're having trouble finding a place to buy any of the products mentioned here's some links:

and here are some link where you can purchase the Isononix Joint Formula:

If you want to add in a referral email you can put in my email which is ashton@morphproductions.com


If you're starting to notice problems I genuinely hope you find this post helpful.
Posted by Ashton Price at 3:31 PM