How To Create An Arpeggiator In Logic Pro

An arpeggiator is a feature available on some synths and software packages that plays notes individually in a patten according to the chords played by the user. It's a feature that has been used in many forms of electronic music for decades and has also found it's way into other popular forms of music like rock and pop through the years.

Many people aren't aware that Logic Pro has an arpeggiator built right in, it's just hidden in the scary environment. I was playing around with it the other night and figured I'd put up a step by step picture tutorial on how to use the arpeggiator in Logic Pro. If you can't see the pictures clearly enough just click on them and you'll get the full size. 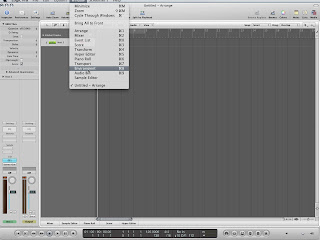 Once you're there go to the top left of the window and select "clicks and ports" in the environment layer menu: 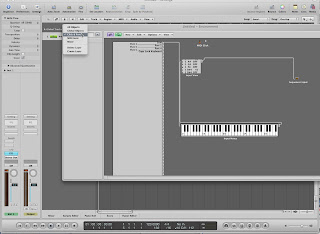 Go into the environment menu "New" and select "arpeggiator": 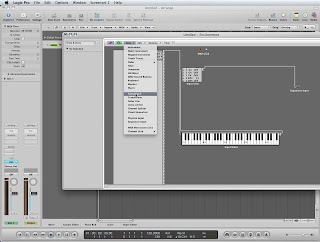 You can see a little arpeggiator icon show up in the environment window. Nothing will happen until we hook this baby up though: 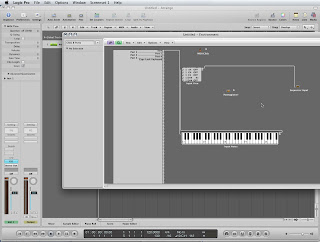 Click and hold onto the wire that goes from "Input View" to "sequencer input" and drag it over to the arpeggiator: 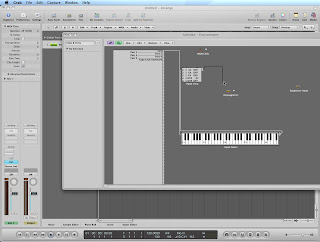 Click at the edge of the top right of the arpeggiator icon to create a new wire and attach it to "sequencer input": 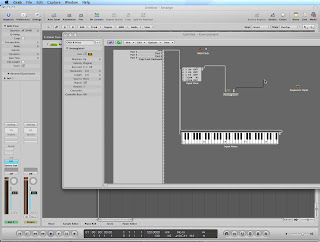 So now it's all connected and ready to go. You'll notice that when you play a chord it won't arpeggiate until you press play in Logic Pro. You'll also notice that the default arpeggiator setting is pretty boring. To make any changes to the arpeggiator select the icon and a bunch of options appear to the left in the inspector. The main ones you'd want to change is the speed of the pattern (16ths, 8ths... etc), whether the arpeggiator pattern goes up or down in pitch (or whether it's random) and the amount of octaves the pattern span. There's other options as well but those are the main ones that you'll use most often. 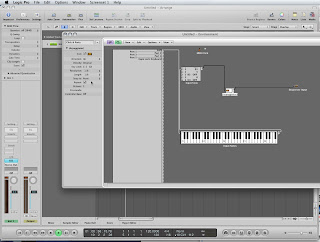 Now that I have it set up I have it in my environment at all times and just connect it when I need it. There's also ways to make switches in Logic's environment to turn it on and off but I'm not going to get into that just yet. Really great feature of Logic and sure in hell a lot easier to use than syncing up my Yamaha AN1X to arpeggiate!


Catch me on the sites:

Posted by Ashton Price at 1:22 PM No comments:

I recently got an Apple Magic Trackpad and thus had to get bluetooth running on my mac pro. You can't get the bluetooth card at The Apple Store because it's not considered a user installable part. After checking on ebay I picked one up for about 60 dollars and waited.

Upon it's arrival I went to install it and slowly watched a 15 minute job turn into one that took several hours. Many of you may know that Mac Pro's sometimes have a problem where the internal antennas wires for airport and bluetooth were mislabelled and I apparently have one of those machines. After fiddling for hours with different combinations the best I could come up with was the trackpad sometimes working, sometimes well. Not cool!

I did some research and there are some usb bluetooth options that work for the mac. I picked up an IOGear USB 2.1 bluetooth Micro Adapter, plugged it in and got my Magic Trackpad working within minutes. It can now be used from far away distances too.

If you're in the same boat I'd suggest you forego the bother of the Apple bluetooth card and just get one of those guys. I'm using Snow Leopard and it's working great. You don't even have to install anything, it just works right away.

This past fall was a bit slower than the busy busy pace I'm use to so I decided to put a bit of work into getting my songs licensed to TV, film and video games. I contacted a ton of music supervisors and as you can imagine very few got back to me. Some that got back to me wanted me to submit music either via CD or online with mp3's. Others recommended some music licensing catalogues that they use frequently.

Music licensing catalogues are a double edge sword for a music creator. They do make your music available to people who want it but of course they want a cut (in some cases a hefty cut). Unfortunately with the large swath of musicians wanting to license their music, music supervisors aren't as receptive to listening to submissions directly from music creators and have started using these catalogues more and more.

The thing to be aware of with these catalogues is that most of them are a complete waste of time because they don't have the connections they claim. I, like most, only have so much time in the day and submitting to these sites can take a lot of it. If I do so I want to make sure they can deliver the goods and make it worth my time.

In order to save everyone a bunch of time I figured I'd give you a few music catalogues that are really good.

www.AudioSocket.com I've been using Audiosocket for years and they're a great company that does a lot of licensing.

www.MusicSupervisor.com These were one of the companies that were recommended to me by one of the music supervisors I contacted in the fall. I gotta say their online tracking/registration system is just incredible.

www.PumpAudio.com This company was recommended to me by an entertainment lawyer and while I submitted some material, I did so reluctantly. Their interface/sign up system was very time consuming and because they required all original signatures it took me forever to get the submission to them because of all the co-writers I write with. The real hitch though is they take a whopping 65% of the up front license money you get. A bit excessive in my book. I finally decided to submit some stuff with them, but only some older stuff that I had.

All of these companies require you to submit music for someone to listen to and approve you for their catalogue. Make sure to submit your best material.

Here's some of my tunes that I've made available to music supervisors: