I wanted to stop using a vocal booth for the new space I was creating because they sound a bit boxy and they get really hot and uncomfortable for the artist.  Part of the plan to get rid of any reflections from the room in the vocal mic was getting some form of reflection filter.  I decided to get the Primacoustic Voxguard because it wasn't quite as bulky as the SE Reflection Filter.

Even though it's not as bulky I was having a real hard time trying to have it placed in a practical way.  It's designed to be on the same mic stand as the microphone but if I wanted to use the mic for another usage (recording acoustic guitar) I lost a lot of flexibility.

After trying a few different ideas I finally found something that works great.  I put the Voxguard on a different mic stand and placed it UNDER the microphone and placed the microphone upside down.  This works really well with a Neuman u87 because the shock mount that is made for it screws into the mic so there's not a lot of risk of it falling out.  If you're using a different mic with a mount that holds the mic with friction you'll probably want to take some other steps to make sure the mic can't fall out of the mount and break. 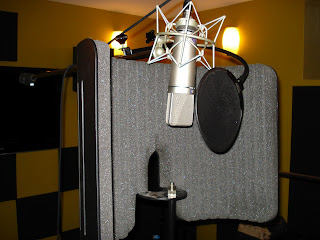 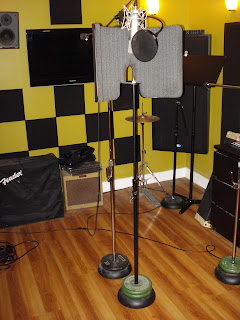 The u87 is screwed into it's mount so it's fairly secure but it doesn't hurt to wind the cord around the stand a few times for extra insurance! 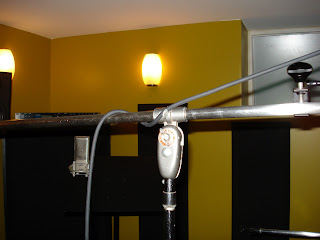 This set up allows me the use of the Voxguard when needed and the flexibility of moving it out of the way easily when I don't.

Get More useful info from me at the following sites: