So I've been using Logic 9 at the studio for a month or so now and I'm really loving it. They've really fixed a lot of the bugs from Logic 8 and added some incredible features. I've already went over Logic's new flex time feature and here's two other favourites that I'm really digging:
1. The gain tool in the region inspector. Basically with this new feature you can pick an object and adjust it's gain independent of other objects on the same track. Sure you can do that with automation but this makes it a lot easier in a lot of situations. I'm using this every day and loving it!
Here's a pic of it, look for the hand pointer: 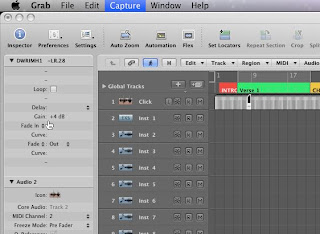 2. Next tool is the slowdown/speed up tool. Before this was such a pain in the ass to do but with this new tool it's become incredibly easy. It's now as easy as doing a fade in/out. Select the object or objects you want to affect and click on fade in or fade out and there is now an option to switch to slow down or speed up. Here's a pic: 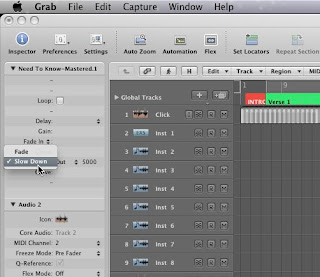 I promise not to use that tool too much... ok I promise nothing!
As usual here's a link to my studio: www.MorphProductions.com
Posted by Ashton Price at 12:35 AM